“In a hospital a little girl with a broken collar bone meets a bedridden man who starts telling her a fantastical story which reflects his state of mind. As time goes by fiction and reality start to intertwine in this uplifting epic fantasy.” 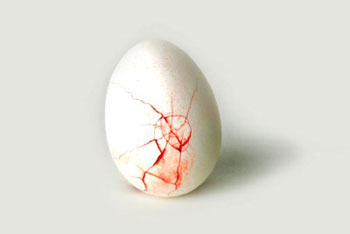 This time it was a puzzle piece.

I watched, fascinated, as its edges began to curl in the crackling oil. I saw, perhaps, the leg of a small dog. Or could it be flowers, ready to bloom? Was this where all the lost puzzle pieces of the world ended up?

I imagined some poor soul assembling this puzzle on their dining room table, anticipation building as everything began to come together, and then… one piece missing, never to be found. The unfinished puzzle, boxed back up and returned to the shelf, ready to mock them whenever they needed a bath towel or decided to play a game of Sorry.

At this point, I realized that I was talking to myself, speaking my thoughts… slowly. Like reading a book to a small child. I was clearly weak with hunger.

I reached down, pulled the piece (now soggy with oil) from the skillet, winced as the cardboard scalded my fingers, and popped it in my mouth.

It was hardly as satisfying as I had hoped, but with some persistent chewing and a glass of water, I managed to gulp it down.

I tossed the pieces of broken shell into the sink and grabbed another one from the carton.

I had a sister once. Three years younger than me, with long, skinny arms and legs, and eyes greener than pine needles. I never liked her very much, except when she was quiet, which was hardly ever.

We lived on the beach back then, without neighbors for as far as the eye could see. We owned the whole horizon, and the whitecaps, and all the polished round rocks. My sister and I would play in the sand, making and building and crushing whole worlds that ran through your hands when you tried to pick them up. We used to go just far enough from the house that you could hold up your thumb in front of your eyes and squint at the house and suddenly the beach looked empty as far as you could see, and it wasn’t hard to believe that we were the only people left on the whole planet.

My sister and I never exactly played together. We played in the same spot, but never the same games. I loved to swim and build castles and take great running leaps from the sand to the waves and back again. She would just sit indian-style, combing her doll’s hair and talking to me as though I was listening.

I have tried to remember what she talked about, but it never seemed as important then as it does now. When I try to listen to those memories, everything sounds like waves and angry seagulls.

One day I was running in the waves pretending to be a fighter plane. I looked up and saw her walking towards me, crying and holding her doll. I don’t know why, but I laughed. I laughed, like I thought something was funny, and when I was laughing, I noticed the way the sun made her hair burn and glow, like everything was on fire. It suddenly hurt my eyes to look at her, and I turned away.

When I looked back, she was gone.

Now, like I said, I never liked her very much, but when she disappeared so suddenly my heart stopped and all I could hear was a rushing sound in my head. I ran to where she had been, kicking my way through the water, and cut my foot on a piece of glass hidden in the rocks and sand.

I swore and fell and grabbed my foot. Then I noticed that there was a hole in the ground where she had been, something dark and bottomless. My head was all stuffed full of cotton because of the pain, and I thought that maybe my imagination was playing tricks on me, but the hole started to get smaller and smaller as I watched, until finally it was just a pinprick in the ground, and then nothing.

I felt something inside my head snap like a rubber band, and before I knew it, I had run the distance from the beach to our house in a panting, stumbling flash. As I ran, I left a zig-zag polka dot trail of gleaming red that floated right on top of all the stones. I ran and I bled myself all over the white of the porch and smeared a streak of horror all down the front hallway. I barreled into the kitchen and grabbed my mother and tried to tell her how my sister had fallen into a hole in the ground and disappeared.

She shushed me and then saw the blood on my foot and picked me up. She carried me straight to the bathroom and held my foot under water, and all of a sudden it didn’t seem to hurt so much because she had wrapped it all in gauze and kissed me on the forehead. Then she asked me again what had happened.

I told her one more time, but slowed it down so that she could understand.
All she said was “Honey… you don’t have a sister.”

Sometimes, when I am walking, I will see a woman out of the corner of my eye who has hair like my sister’s, and I will stop and turn to stare at her. Every time this happens I want to grab the woman, whoever she is, and hug her until her bones creak. Instead I just stand there, motionless, holding my arms out like I expect something. Most of the time I realize soon enough that these women aren’t my sister, but it gets harder and harder every time. I usually have to turn my head and look at them sideways to really be sure.

I want to meet her, like she is now. Like she would be, if she hadn’t disappeared.
We would have so many things to say to each other – I just know it. Every time I think about meeting her again I run our conversations through my head. I’m sure we could talk for hours, just sit in a coffee shop and tell the stories of our lives.

She would live upstate, and have an older husband with a gray patch of hair on one side of his head, and they would have two boys – twins. Their house would be big but modest, and have the kind of driveway that curves through trees and around bends. She would be an archeologist, digging for dinosaur bones, or for pottery from an ancient culture. She would cry a little bit when she saw me, especially since we had been apart for so long. I would realize how much we had in common, and how funny it was that we hated each other so much when we were young. Distance and time would actually have brought us closer.

I just wish my family felt the same way. I used to try to talk to my mother about what happened and why nobody believed me. For a while she reacted like she thought it was a little funny, but when I kept bringing it up more and more, she started to look like she was talking to me from behind a glass wall that got thicker every time. I had to talk to a therapist eventually, but that never really helped anything.

I got older and we moved away from the beach, and all my memories of that place became like watercolors in my mind, great big strokes of blue sky and sand. But I never forgot her. I remembered her even if nobody else did. I could still remember the way the wind coming over the sea made her dress twist and billow, and the way she disappeared without even making a sound.

And then, one night, I had a dream and my sister was in it. This wasn’t like most of the dreams I can remember; I knew I was dreaming, but at the same time things smelled and tasted and felt more real than being awake.

She was the same age she had always been. Her face was frozen in time like the one painted on her doll. She just stood there, playing with the folds in her dress. A few moments passed in complete silence and then she sighed and held out her hand.

When I woke up, I tried to hold onto the details of my dream, because It seemed like there was nothing more important that I could ever do, nothing that mattered so much, but the longer I sat the more it felt like I had never even dreamed anything after she took my hand, it was all I could do to keep from knocking the back of my own head in, and I felt the memory skipping away, rushing off somewhere else like blood in my veins, so I went downtown.

I went downtown, and I counted the faces of every woman I saw with hair like strawberries and wheat. It was all I could do. I had to get to know as much about them as I could before the light bouncing off the midday concrete burned so bright that I could no longer see anything else.