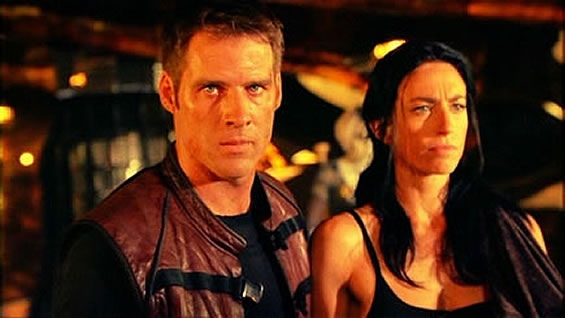 This is pretty much a complete bolt out of the blue, but from what I’ve just read on scifi.com, Farscape is being revived for a series of “webisodes”. Here’s the article:

SCI FI has ordered 10 webisodes of Farscape, to be produced by Brian Henson and Robert Halmi Jr. and produced by The Jim Henson Co.

The series will expand the Farscape universe, but the network had no announcements on casting or premiere dates.

Sure, these may be 2-3 minute long shorts that very well may barely involve any of the main characters, but I am so 100% there for this. Anything new in that universe is like manna from heaven to me, especially if it means that a new miniseries could result. Hell, I’d watch webisodes until the cows come home.

Ain’t It Cool News reported a rumor that Bourne Supremacy director Paul Greengrass will step in for Darren Aronofsky helming the adaptation of Alan Moore’s classic superhero graphic novel Watchmen. The site didn’t cite a source for its information.

Lloyd Levin and Larry Gordon are producing the movie, which is still on track for a summer 2006 release, the site reported. (“from scifi.com”:http://www.scifi.com/scifiwire/art-main.html?2004-11/19/10.30.rumors)