I know we’re only a few short weeks into 2007, but I think I may have already found my most favorite album of the year: 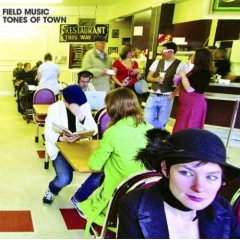 I discovered Field Music thanks to a little show on MTV2 called Subterranean. Believe it or not, MTV’s second channel still devotes about an hour a week to cool new music very late at night when noone is watching! According to the WikiPedia, Subterranean plays an average of nine videos in every hour-long show!

But… I digress! Field Music’s self-titled debut was easily my #1 album of 2006 (edging out The Obliterati by Mission of Burma by only a small margin, mind you!) According to iTunes, I’ve listened to their first album an average of about 50 times, and I still love listening to it! Few albums have achieved that kind of staying power with me… I admittedly have a verrry short attention span for music nowadays, and it’s an achievement if an album stays in heavy rotation for about 3-4 weeks.

The ultimate example of an album completely dominating my time was during the summer of 1997, when our friend OK Computer was pretty much the only thing I listened to for several long months. (This was, of course, back in the days of Discman, so the singular musical focus of that summer is perhaps a relic of the pre-iPod years.)

There have been few albums since 1997 that have captivated my attention span to such a level, but Field Music has definitely proven their staying power to me… and I think they’ve hit it out of the park again with album #2 – I bought this album last night, and I’ve already listened to it five seven times…

So, the moral of this story is… in general, ignore Pitchfork. In specific terms, go buy yourself some Field Music. You can also check out some of their songs at their MySpace page.

…And you should definitely check out this awesome video for “In Context”: