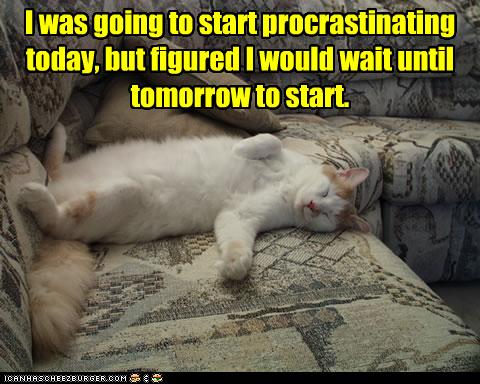 This video caused the very definition of laughing out loud. 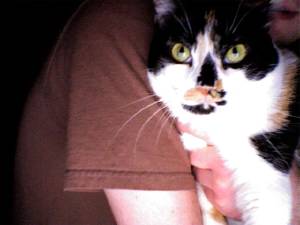 Friday was kind of an interesting day. When I came home from lunch, I noticed that Appollonia hadn’t eaten any of her breakfast, and she normally has a very healthy appetite. She was also hiding somewhere, which was doubly strange because my cats have a habit of meeting me at the door whenever I come home during the work day.

I went to look for her under the bed, and she surprised me by jumping out from under my quilt, where she had curled up (to keep warm?) I went to pick her up and when I held her hindquarters, she meowed like she was in pain and jumped out of my arms before hiding under the bed.

Needless to say, this was pretty worrisome, and I immediately called the vet. At first I wanted to take her right in, and damn the prospect of being late back to work, but she had other ideas, and could not be coaxed out from under the bed. I ended up just making an appointment for 5 o’clock so I could make sure to get her into the vet’s office as soon as possible, and I figured I’d just leave work early to get there.

It was a good thing I went ahead and made the appointment, too, because when I came home at 4 o’clock my bedroom carpet was covered with blood spots. I don’t know if she was bleeding at lunch and I didn’t notice it, or what, but, as you might imagine, I was pretty freaked out. I ended up doing everything I could think of to get her out from under the bed… rattling a plastic bag on the other side of the bed did the trick. Corralling her into a cat carrier after that was not an easy task, but I made it to the vet’s office in good time.

(And that was more than you wanted to know about my cat’s butt!)

She ended up staying the night at the vet’s and had surgery on Saturday, which put me out about $400. It was worth it, though… it was good to know that this was something that could be corrected very easily.

The vet techs told me that I needed to keep her cooped up for 3-5 days so she could heal properly (and so Jackson wouldn’t beat up on her), but I caved today. She was just so pathetic, and I felt like such a bad kitty-daddy for keeping her all cooped up in the bathroom. I’ve switched the little buggers to a high-fiber cat food, so that’ll hopefully help prevent this sort of thing in the future.

It feels like some kind of rite of passage as a cat owner, though… the first major cat surgery that doesn’t involve removing reproductive organs! Ah, well… cats can be expensive creatures, but they make up for it by being all cute and furry. Works every time! 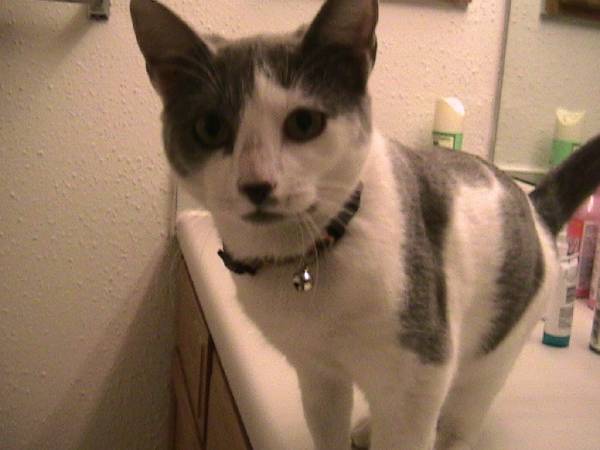 In other news, a kitten came to my door last night while I was watching TV. She is wearing a collar, so she definitely belongs to someone out there. I’m sincerely hoping I can track down the owner sometime soon, because I sure can’t keep the cute little bugger. Two cats is enough for me (and is the limit allowed by my complex). Not to mention the fact that she hisses and growls at Jackson and Appollonia at pretty much first sight.

EDIT: Mini-cat, as I took to calling her, didn’t stay with me for too long. The girl I spoke to in the office of my apartment complex left me a voicemail the next Monday night saying that the owner had come in, so I packed Mini-cat up and dropped her off at the office the next day. She sure was cute, but she was a little terror… once she got used to being at my place, she spent all of her time out of the bathroom chasing Jackson and Appollonia around the apartment. My poor kitties were getting all intimidated! It was just as well… two cats and a person is crowded enough for this place.

Yesterday I took Apollonia for her annual check-up visit to the vet. 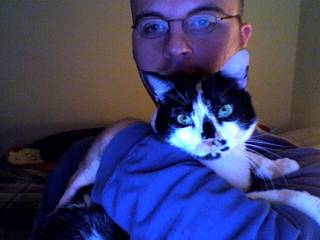 She weighs 17.7. pounds. She has gained an entire pound since the last time she went to the vet. Needless to say, she gets to go on a diet. At least she didn’t pee or shit in her box, thank you very much.

I took Jackson to the vet today – he was waaaaaaaay overdue. Part of the reason I put it off for so long is because the vet is damnably expensive, and if your pet seems pretty healthy… it’s kind hard to pony up the cash for the whole thing. I had a recent conversation with someone who had a cat that got pretty sick very suddenly, however… and I instantly felt guilty, so I set up both cats with appointments.

The whole thing was extra-special fun, of course, because _Jackson Does Not Like Riding in The Car_.

He demonstrated his anger/fear by peeing in his box before I even made it on the freeway, and proceeded to take a shit about 2 minutes later. I was barely in the car five minutes before he had made a complete mess of himself and stunk up the whole place. When we finally made it to the vet’s office, he sat in his box howling like he was being murdered, and the other customers in the office just looked at me like I was a terrible kitty-daddy.

All the other kitties were sitting quietly in their carriers looking thoroughly calm and well-behaved, while Jackson was moaning up a storm and trying to push his head through a 1-inch hole he found in the side of the box.

When we finally made it to a room and I pulled him out, he had soaked himself and had shed about half his weight in fur. He was completely well-behaved once he was out of the box, though… maybe I just have a claustrophobic cat, I dunno.

Appollonia has her appointment two weeks from now… luckily she’s a complete angel in the car. 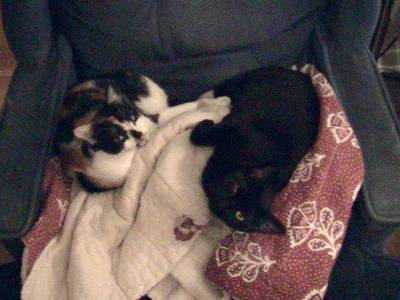 “In a rare moment of peacefulness, Jackson and Apollonia share the same chair!”

(P.S. Yeah, this is why I keep the little buggers. They trick you with their cuteness.)

Boy, nothing like being awakened at 6:30 in the morning by 10 pounds of cat making a kamikaze leap directly onto your crotch and bladder (full, I might add). He knows what he’s doing, too. He’s an evil monster. Whenever he sees me about to destroy him in my rage, he skitters off somewhere out of reach. Bastard.

Luckily, I needed to be awake this morning so I could go to my substitute orientation at 8:15, and honestly, I was already half-awake by the time he attacked.

i have made my first test film with my camcorder and imovie. (probably requires quicktime 6.3)

i quickly discovered that imovie is more annoying that i remembered it being. also, all of the video captured was waaaay too dark, partly because i live in a very murky, dark place.

also, my hard drive is much too full for video editing. i’ll clean it off tomorrow, but i’m going to have to buy that external hard drive pretty soon. from what i can tell, 1 minute ~ half a gigabyte. fun.

anyways, this is video of my cat, jackson. he’s the black one. the other kitty cat is appollonia, jackson’s girlfriend.

my kitty no longer has any testicles. right now he’s taking his angst out on the delicate private parts of a stuffed monkey, who probably deserves it. actually, jackson has been pretty frisky and happy for a cat missing his manhood. so far it hasn’t affected his personality at all, which is cool. although the constant biting will have to stop.

this afternoon i watched yojimbo, which lived up to the hype. there’s something i’ve noticed about some of the “classic” movies – they don’t always deliver on the promise. there have been so many supposedly great movies that have underwhelmed or terribly disappointed me. for example, i watched “Night of the Hunter” recently, which was supposed to be one of the scariest movies of all time. this might be a symptom of my post-modern jadedness, but i just thought the movie was kind of okay. i could see how it was probably revolutionary for the time, but…. to me, it was pretty dated.

yojimbo, on the other hand, was a fucking badass movie, and i knew it as soon as i saw toshiro mifune and his macked-out self. it was to cool to watch it knowing that i had been remade as a western twice… since the movie is basicallly just a “western” in samurai clothing. i actually wish i could think of another word for that particular genre, because it can exist without requiring cowboys and shoot-em-ups, despite what you might think. i’m sure someone trained in the jargon of film could deconstruct the whole thing for me right now (come on all you rtvf majors!) but what does that matter. you know what i’m talking about.

i also watched old school tonight, which i thought was really funny… and everyone else thought it was just alright. i mean, i suppose it could have been a whole lot funnier… and the climax was pretty blatantly a ripoff of animal house, but every movie about a fraternity is going to pay homage to that particular film… it’s impossible to miss. well, maybe “the skulls” didn’t, but that movie was made, i’m assuming, by people who had had no actual contact with a fraternity (i’ve never seen it, but i’m probably right). speaking from personal experience, old school was written by people who did actually know what fraternities are like. i mean, we’re even planning our own ky jelly wrestling event… (probably kidding, although i wouldn’t completely discount the possibility.)

i have a feeling that it’s the kind of movie that gets better every time you watch it, kind of like PCU, which i must have seen 1.5 bajillion times now.