Here we are again… another year, and even more new shows to watch and watch fail. In the past few years I’ve paid much closer attention to the premiering shows, and I tend to check out anything with promise.

Of course, this means that I also end up watching plenty of shows that get canceled. Studio 60 is the most prominent example, of course, but I also watched Smith (I could tell after the pilot that it was done for), Help Me Help You (I had actually forgotten about this show), and Andy Barker PI. Studio 60 is the only one I really miss, but I started missing it a few episodes in after it never quite matched the promise of the pilot. It would also be nice if Andy Richter could find himself a successful show.

Earlier in the week I had a more ambitious goal to write a full review of every new show I watch, but I’m scaling that back a bit because I’m feeling lazy. I have, however, decided to rank the new shows I’ve watched so far: 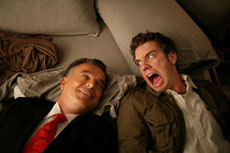 1. Reaper – This is a must-see. The creators did a good job of establishing likable characters and the humor is right on target. The premise is dealt with in a fairly absurd way (“Sorry about that, son… we sold your soul to the devil to save your dad’s life!”), but overall that works for the tone of this show.

The actress who plays the love interest didn’t quite mesh with the rest of the show, but she was a late addition, replacing another actress, so hopefully things will gel more in later episodes. In fact, the most negative review of this show on MetaCritic says that “Reaper is strictly for fans of movies like Superbad.” How can you go wrong with that? 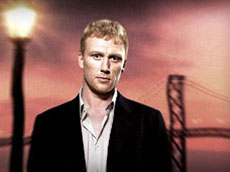 2. Journeyman – I was pleasantly surprised at how much I liked this show. It gets major points for throwing in a completely unexpected twist, which is pretty impressive for a brand new show. I also liked that the character was resourceful enough to deal with the problems that time-jumping could cause for his life and marriage in the present.

I’ve read it did terribly in the ratings, however, so it may not be long for this world. Hopefully it’ll get some buzz and start holding on to more of the lead-in from Heroes. If you missed the premiere, you can watch the whole thing on NBC’s website, or you can buy it on the iTunes store, thanks to the funny ways of television production (just because it airs on NBC doesn’t mean it was produced by NBC). 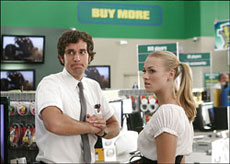 3. Chuck – This show was highly entertaining, but only if you can ignore the serious gaps in logic in the setup. Somehow Chuck is sent an email full of a huge number “encrypted images” that contain intelligence from the NSA and the CIA. When he watches a slideshow of these images (it apparently takes all night) he wakes up with a brain full of crazy intelligence that has been interpreted by the computer that the images were stolen from.

This raises major questions, like: How was someone able to send an “email” full of millions of images and possibly terabytes of data? Why on earth did the NSA and the CIA put “all of their secrets” together on one computer? Why did they encode all of these secrets into images? Was it some kind of secret training program, i.e. a more efficient way of teaching someone intelligence data? That would certainly make slightly more sense than the explanation given in the pilot.

I sound pretty negative about Chuck, I know, but I really did laugh a lot, and all of the previews make future episodes look even better. Maybe they’ll do a better job of explaining the premise in later episodes, or maybe I’ll stop caring if the show just gets generally better. I’d also accept it if they started making fun of their own premise. It would be more in line with the style of creator Josh Schwartz’s previous show – The OC. 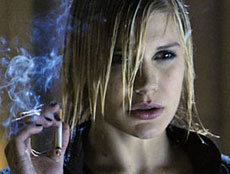 4. Bionic Woman – The problem with this one is just that Katee Sackhoff is too damn awesome. In a perfect world, she would play the main character, but only if it meant she could also finish Battlestar Galactica.

Michelle Ryan as Jaime Somers is certainly nice to look at, but didn’t really hold her own against Sackhoff in the pilot. Some of the dialog was fairly clunky, especially her speech at the end of the episode. I wonder how much of this can be chalked up to a British actress trying to do an American accent – not everyone can be Hugh Laurie or Colin Farrell, after all. This show wasn’t a complete disappointment, but it definitely did not live up to my expectations. I’ll keep watching for as long as it is on air to see if it improves.

Other than those four shows, I’ve also got Dirty Sexy Money and Gossip Girl waiting to be watched, and this upcoming week I’m recording: Cavemen (too awful-sounding to miss), Carpoolers, and Pushing Daisies. Pushing Daisies has been getting ecstatic reviews, so I hope it lives up to the hype.