I’ve been taking my lunch to work for a while now. Eating at work not only saves me gas (I don’t have to drive home or drive somewhere to eat out), it also gives me more time to relax during my break. It’s been a big part in helping me fulfill my goal of reading 52 books in 52 weeks.

I’ve got a small collection of meals that I bring with me. I used to bring a lot more frozen food, stuff like pot pies or pizza pockets, but I’m also trying to save money lately, so any time I can cook for myself instead of spending a lot more money on something that only feeds me for one meal is always good.

Usually, though, when it comes to cooking for myself, I tend to fall back on pasta or an Asian noodle dish I improvised when I was trying to recreate food from Pho Hoang. I’ve also been cooking larger frozen dishes and bringing the leftovers for the next few days. That at least seems to work out pretty well, although I still felt like I could recreate a frozen dish on my own for cheaper. Ah, hubris…

To make a long story short, a few nights ago I decided to make tamale pie from a recipe I found online. My first mistake was to only read the reviews they included down at the bottom of the page… if you pull up the full list of reviews, you get reactions much more like my own…

The resulting mixture ended up burning on top (cheese should not be included as a crust on top of this dish) and being undercooked everywhere else. The corn mush didn’t magically turn into crust, probably because the meat/corn/etc mixture was full of liquid.

The resulting concoction is edible enough… it mostly resembles chili with corn meal in it, although it’s way too salty. Adding salsa helps the flavor a lot, but I’ll be surprised if I can convince myself to eat the huge amount of leftovers I have in my fridge. It’s a shame, too, because the ground beef looked and smelled delicious before I put it into the casserole dish.

I sincerely doubt I’ll try this particular recipe again, although I may try to create my own tamale pie from a combination of a good cornbread recipe and basic chili. One of the biggest problems is that this kind of recipe makes an unholy mess. I really do not look forward to cleaning out the dish once I’ve gone through the leftovers…

I did have some cooking successes this week, however. I put back into rotation a recipe for pan bagnat sandwiches that is fairly easy to prepare. It’s from Alton Brown’s Good Eats, one of my most favorite shows on air right now. (It occurs to me that it’s a bit odd to constantly watch a cooking show when I don’t actually cook much myself…) Alton is pretty happy with his sandwich… check it out: 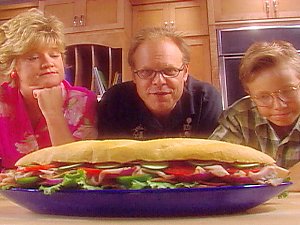 I do tweak his recipe a little bit. I use single-serving sub sandwich rolls instead of a giant roll, simply because I couldn’t find a place that sells sandwich appropriate bread of that size. HEB sells a four pack of sandwich rolls that are absolutely perfect. I also don’t let the sandwich sit out at room temperature – my mother reacted in horror to the thought of eggs sitting out like that – I just wrap it and put it in the fridge overnight.

I usually make this sandwich using tuna – one can of tuna fits nicely if packed into the bottom half of the bread roll – but I’ve also tried it with chicken and turkey lunchmeat, and it works equally well. I think I’m going to try using salmon next. Beau swears by Central Market’s 365 salmon, and it sounds like a delicious idea.

The other really nice thing about this recipe is that if you wrap the sandwich tightly in plastic wrap, it becomes very portable. If you’ve pulled out some of the breading before making the sandwich, the bread roll will fit together nicely and keep everything from falling out.

I haven’t given up on trying new recipes, however. I’ve got a cheap pasta/Italian cookbook that I bought at Barnes & Noble a few years ago, and I think I’m going to start pulling out some of those recipes. I think I may also try to find a good, cheap, Asian cookbook, just because I’m always craving Chinese or Vietnamese food.

Man, i’m addicted to the stuff. I started off with the pre-ground Folgers cheap-ass shit, which was alright for a while, but then I started getting curious about the world of GRINDING YOUR OWN, so I made my way to the local Wal-Mart and dropped $15 on the cheapest one I could find so I could feed my ever-expanding habit in my own home. Living a few blocks away from Central Market is also a nice bonus, cos about a week or so ago I popped over there and moseyed my way into the “bulk foods” section for which they are famous. After a few minutes of consideration, I chose the “Rasberry Chocolate” flavored coffee – “flavored” coffees not having been within my realm of experience up to that point, this one seemed like a good place to start.

…And oh, if you could smell the grounds after a few pulses of the grinder. It’s amazing. The cup of coffee I made yesterday was probably the most delicious I’ve ever had.

Downside is, of course, that if I don’t drink the stuff I get cranky, and eventually have headaches. If I make it too strong or drink too much of it, my heart races and I get all twittery. And right now I kinda have a funky metallic taste in my mouth (I made it verrry strong this morning). But damn if the coffee doesn’t taste good and settle my stomach and help me be a little bit more alert.