This means you, Ryan P. Craven.

I will fully admit that I am a huge library nerd. I have always loved going to the library, and, in fact, when we lived in Wichita, KS, I used to beg my parents to take me to the downtown library just because it was so enormous (3 floors!) and I could wander aimlessly through the sci-fi/fantasy books, and then browse the music, and then pore over obscure photography/art books.

I was a bit disappointed when we moved to Sugar Land because none of the local libraries ever seemed to match the sheer size of that great big Kansas library in my memory. I didn’t really get the chance to see an awesome library again until I went off to college – the SU library was pretty great, for example, although I could never seem to browse fiction the way I wanted to… I guess that’s just as well, though… I was really too busy to be reading for fun most of the time I was in college.

It’s just as well, though, because the Austin library system is awesome. As soon as I had an Austin-area lease document in hand two years ago, I made my way to the downtown library and got myself a card, and I haven’t stopped using it since. I constantly tell the people I know that they should get a card if they don’t have one… you’ll never regret having a library card, even if you aren’t much of a reader.

One of my most exciting realizations was the fact that the libraries here have a pretty excellent DVD selection, including entire seasons of TV shows that can be checked out all at once (I got the entire third season of Farscape from the library, for example, and that’s a hard show to find at a plain ol’ video rental place.)

It also just so happens that I have a newly-fancified-and-upgraded library just down the block from where I live. Good stuff.

Anyways, long story short, I was definitely excited to come across this 13 book hacks for the library crowd article on lifehacker.com. Especially interesting was the section on tracking your checked out books using a nifty OS X menubar addon called Library Books.

Setting it up did take a little bit of tweaking – the Austin library wasn’t included in the default list of libraries, but once I dug around on the library website a little bit, I figured out that it is based on the “iBistro/Sirsi Catalog System”, which is included in the Library Books menu.

The hardest part was figuring out which URL to use for the Catalogue Host:

Once you’ve got that, all you need is a library account and an online sign-in. Here’s how the drop-down looks on my system: 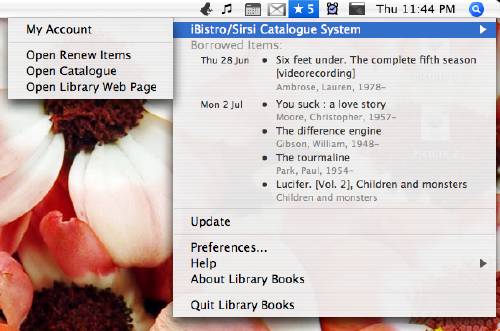